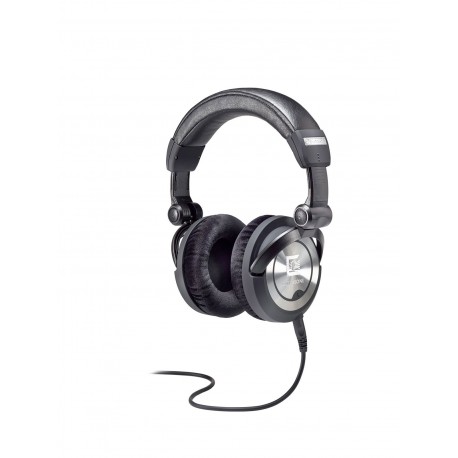 Thanks to its titanium-coated sound transducer, the PRO 750i is the pinnacle of exclusivity and sound purity within the entire PRO series.

These drivers offer the most exact and correct sound reproduction you can imagine.

Using specifically developed velvet earpads, you will have fantastic comfort for extensive working hours, combined with a maximum of isolation. The PRO 750i comes in the safe PRO hardcase, incl. one straight and one coiled cord, a spare pair of velvet earpads which are easy to change due to the speed-switch technology.

Most headphone drivers produce low-frequency magnetic fields as they convert an electrical signal into the acoustical signal that we hear as music. Ultrasone has developed a special MU Metal shielding that we call ULE (for Ultra Low Emissions) to reduce this radiation by up to 98%, compared to conventional headphones. This technology has withstood the test of international review and is recommended by technical surveillance organizations. Ultrasone originally developed ULE-technology for PROfessionals, since they spend half of their lives in headphones. But due to overwhelming consumer demand, we are pleased to offer ULE in the other Ultrasone lines.

The patented S-Logic® technology is described as Natural Surround Sound. No other digital surround system can compare with this standard. As the sound of normal headphones will sound direct and even on both sides, the S-Logic® system pushes the sound around your head. Instead of hitting the inner ear directly, the signals are reflected off the surface of the outer ear in different directions before entering the auditory canal to create a natural 3-dimensional sound. It appears as though you are listening to speakers meters away. Even at very low levels, this spacious sound allows you to hear precisely. And on top, the S-Logic® technology does not require additional equipment.

S-Logic® creates a Natural Surround Sound sensation and allows at the same time a reduction of sound pressure levels at the eardrum by up to 40% ( 3-4 dB). This may reduce the risk of hearing damage while ensuring hours of fatigue-free listening. However, we generally advise not to listen to music at high volumes to prevent hearing damage.

S-Logic® Plus profits directly from innovations developed for our flagship Edition range, the ultimate headphones for critical listening. This sophisticated new technology combines precision dampening with micro-acoustic reinforcement, allowing driver, buffer-board, and spatial parameters to complement one another in an optimal manner. So the acoustically redesigned ear-cups of these new models and their tonal fine-tuning result in a most neutral sound impression with more vivid perception of voices and instruments.